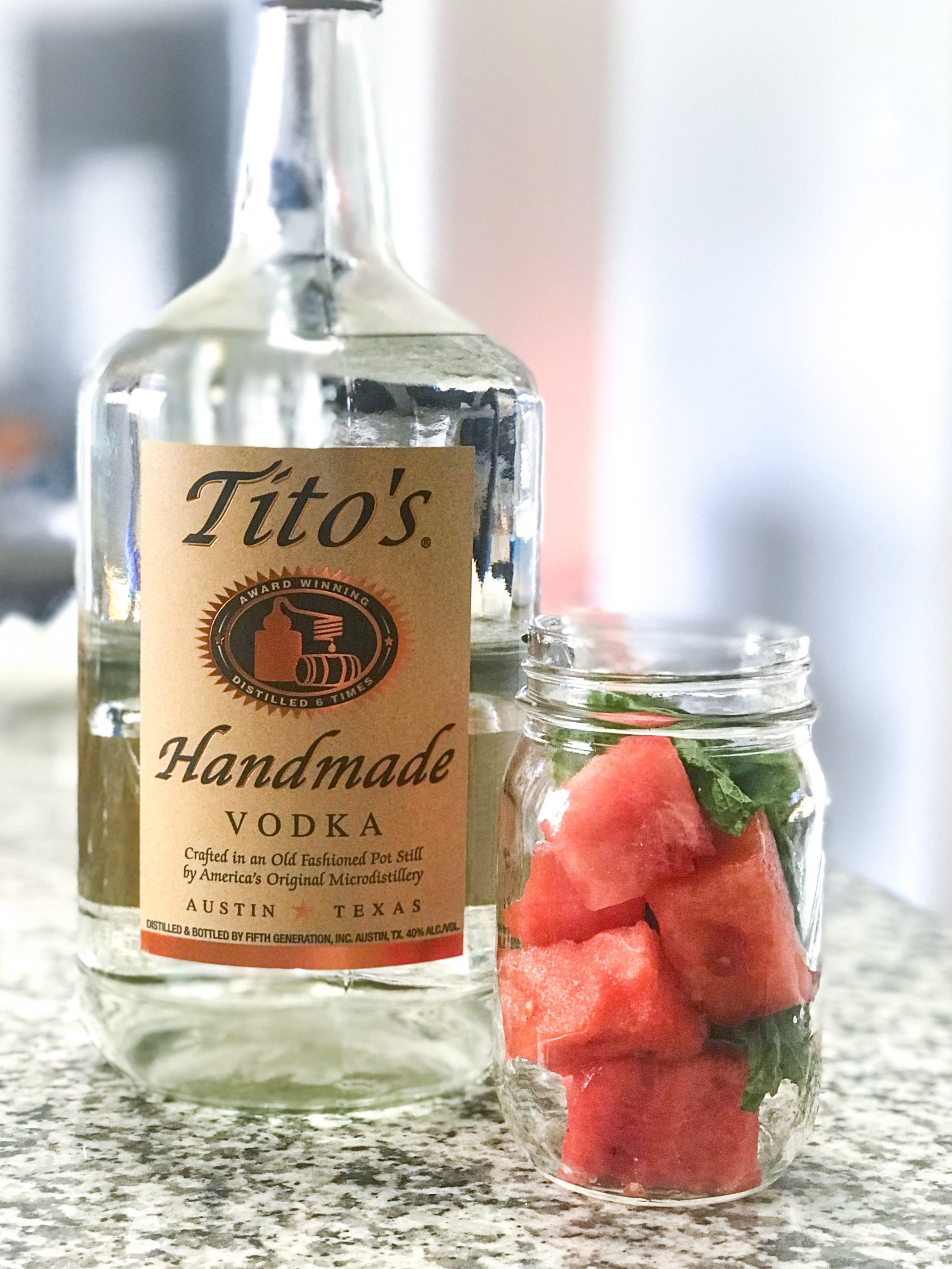 You guys, I know it is September, and as usual, I meant to get this post out way sooner, but well.. life. BUT… I live in Florida and it is still 100 degrees, so when I’m not drinking my ICED pumpkin spice, I am sipping on my fruit infused vodka. SO GOOD! I’m hooked.

I love a good craft cocktail when we go out, but I struggle to make them at home because I feel like there are always so many ingredients, and items I don’t always have on hand. I also struggle with feeling like crap after I drink more than 1 because of the amount of sugar they typically have. One of my all time favorite summer cocktail flavors is watermelon. Watermelon and summer just go hand in hand. It is so refreshing and definitely my go to for a fun cocktail.

I love Tito’s vodka. I am either Grey Goose or Tito’s, any other vodka just isn’t for me. Grey Goose has some fun flavors out, but Tito’s sticks to their standard vodka, which was perfect for infusing. Recently, I had an extra watermelon that was going to go bad from our local farm, Mick Farms, and the first one was so good, I couldn’t let it go to waste. So, first time making infused vodka, here I come!

I pulled out my stash of mason jars. I bought a large box full a few years ago for birthday party center pieces. If you don’t have a few mason jars lying around I would suggest picking some up. They have a million uses, and are super cheap.

I don’t have specific measurements for this infusion – but seriously, it’s hard to go wrong here. I stuffed my mason jars full of cut up squares of watermelon and shoved some mint in the open spaces. Once I had the mason jar packed in, I poured in the vodka to the top of the jar, closed it and set it in the fridge.

We had a last minute get together 3 days later, and ended up drinking the vodka. I was hoping to let it sit for a few more days, but what better time to try my concoction then when a few girlfriends? I strained it into a new mason jar and a few people snacked on the watermelon. It was delicious! The vodka took in a really powerful taste from the watermelon and mint. It definitely wasn’t what I was expecting, it was better!

Infusing my own vodka made it feel like my at home cocktails were way fancier then they actually were. I try not to have too much sugar when drinking cocktails, so I was loving this infused vodka with water, but would also pair well with La Croix (or any other flavored water), Sprite, Lemonade, or soda water.

This is a perfect recipe for when your fruit trees are in season and you have too much, or when the big pre-cut tubs are BOGO at the grocery store. A few other combos on my list are:

Any other suggestions on infused vodka flavors?

Have you ever infused your own vodka? Any other tips and tricks?

MY LETTER TO YOU ON YOUR 2ND BIRTHDAY