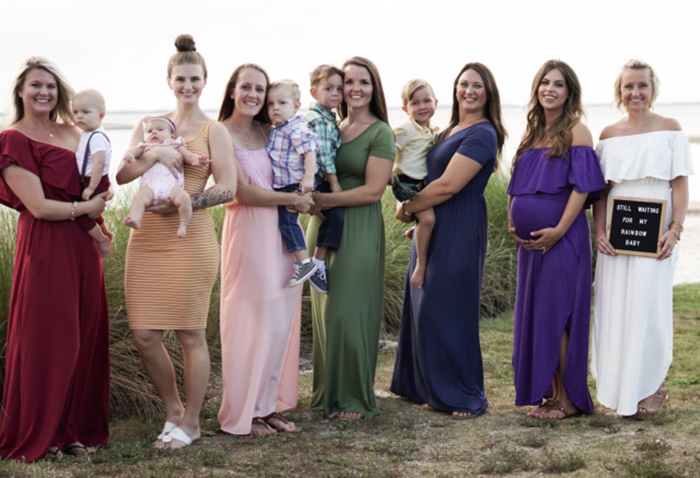 I wasn’t this nervous when I wrote my story. I didn’t think it would be so hard to have it out there. I know that there are so many others who have been through the same, or much worse, but I think it is more the vulnerability then anything. As I sit here waiting for my miscarriage story to go live, my heart races. There have been 4 girls that went before me, and my heart broke for each of them. It is nothing I would wish on anyone, and I hope that this helping so many others along the way. I am so blessed to have found this awesome group of ladies!

If you haven’t already done so, head over to My Hand In Life where a total of 8 women will share their stories on miscarriage.

Here is my story:

I never wanted to be pregnant. I wanted kids, eventually, but I never had the desire to have a baby. I was more of a “kid” person, not so much for babies. I mean, what could you do with a baby? Why should I have a baby when there are so many kids out there that need families. I don’t need to add to the population, and why go through 9 months of hell when there are plenty of kids that need homes. This was my thought process. I was adopted, and I think a lot of my “adoption humor” comes from how open we always were about it. I always said “I’ll just walk into the adoption agency, ask which kid can wipe their own ass, and they’re with me.”

Then I got pregnant. I was 26, in a great relationship, starting a new career, and was almost done with my MBA. I was shocked, since I was on birth control, but surprisingly, I wasn’t freaking out. I was ok with it. My baby daddy, Robby, is part of a huge family, and he was super excited. Maybe a little nervous considering I told him at 3 a.m. when we finally got home from going downtown. Sidenote: I feel like I have to mention the real MVP here, my best friend Desirea, who took me to buy like 10 pregnancy tests, and then when we were at the bar took all the shots and ordered a sprite in a “cocktail” glass for me so no one would know.

We were excited. I had no idea about this process, what I needed to do, or who to tell. So I made my first doctors appointment to confirm. We went together and I was measuring about 7 weeks. The doctor gave me so much information, free samples, and made my next appointment for 12 weeks.

We took our sonogram photos and told our families. We were so excited to share this news with them. We knew they would all be so excited. My parents 1st grandchild, and Robby’s mom’s 9th grandchild. Just adding to the tribe.

At my 12 week appointment we anxiously waited for our sonogram. We would get to hear our baby’s heartbeat and see our little angel (or alien, because thats what the sonograms look like, lets be real). Except, there was no heartbeat. We could see the baby on the sonogram, but could hear nothing.

While I laid there and Robby held my hand, my heart sank to my stomach. The nurse continued to look for some sort of life, some sort of heartbeat, but there was nothing. The doctor came in and tried again. Nothing. We moved over to the doctors office, where he told us I had a miscarriage.The rest of the conversation was a blur. In my particular situation, I needed to have a DNC, so we scheduled it, on my birthday. This was by far the worst birthday ever. I was devastated that I lost this life that I never thought I wanted. I felt like it was my fault. Like I did something wrong, or maybe this was because I “never wanted a baby”. I knew in my heart that none of this was true, but I wish my brain would have listened.

I obviously was upset, but I couldn’t forget about Robby. This was his baby too. This was a loss for him too. I wanted to shut down and lock myself in a room, but that wasn’t fair to him. I think so many times we forget about the guys, even when their way of grieving can be different then ours. As we lay in bed that night, he turns to me and says “want to go adopt a dog tomorrow?”. Umm.. duh. If we can’t have a baby, we’re adopting a dog. This was our way of dealing with the loss. It may be different but it worked for us. We added to our family the very next day. Our sweet pitbull mix, Charlie, was the perfect addition to mend our broken hearts.

I was adopted because my mom could not have children. She had cancer multiple times, and the chemo prevented that. She had over a dozen miscarriages herself before they came to the conclusion that adoption was their only option. She told me it was ok, and that this type of thing so early was normal. Because unfortunately, this was my moms normal. She told me how she wished we couldn’t find out so early along, because it happens all the time. I’ve spoken with others who have had miscarriages, and they ask me how I “got over it so fast” or that they never knew because I didn’t share it openly. For me, it helped to have my mom tell me how normal this was, and that this was not meant to be just yet. It may sound harsh to some, but it was what I needed.

I know that miscarriages never really leave you. It is something I think about more than I’d like to admit. About 4 months later we got pregnant with our son, Dylan. I waited until we were 14 weeks to tell anyone. I was scared throughout the entire first trimester. I still fear that if I want to have more children, I could have more miscarriages. I cringe when people tell me that they are 4-7 weeks pregnant, because I know it is so early. For anyone else going through this I hope you know it’s not your fault, you didn’t do anything wrong, and it happens more than you know.

“As you do not know the path of the wind, or how the body is formed in a mother’s womb, so you cannot understand the work of God, the Maker of all things.” Ecclesiastes 11:5