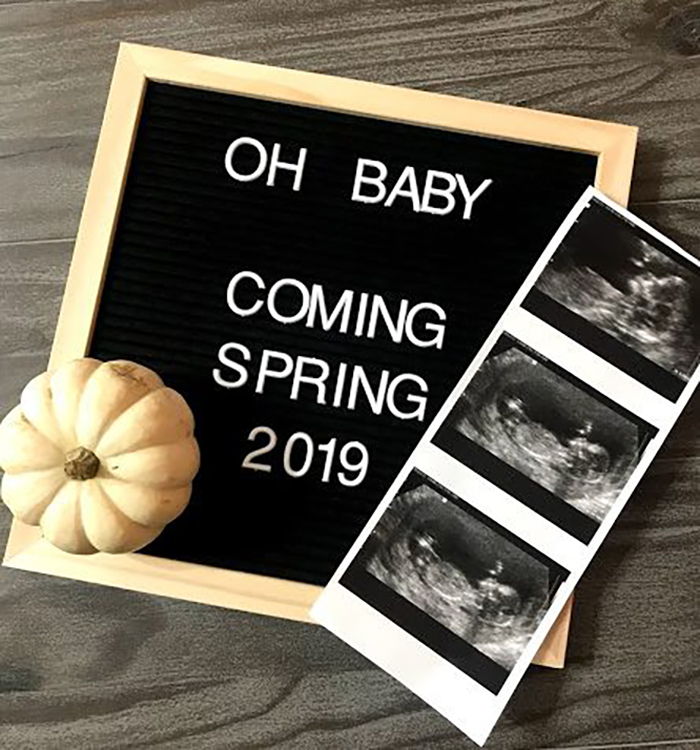 Oh baby is right. We are expecting baby number 2. Saying this, writing this, knowing this, is so surreal! To say that we are excited is an understatement. We have had so many blessings this year, and this is really the cherry on top.

I knew that I wanted more kids, but I never thought that I wanted to be pregnant again. I said all the time, we were only adopting, no need to be pregnant. I didn’t have an awful pregnancy with Dylan, but it wasn’t great. I was never sick or anything, but at about 6 months pregnant until about 2 weeks after I delievered I blew up! I was so swollen! I mean, it wasn’t normal for someones feet to look like that. I didn’t have any ankles, or calves for that matter, it was like straight thighs all the way down to my feet. Picture Shrek’s legs – yup, that was me.

Honestly, it just hit me that I may want to have another baby. I don’t know where it came from, I don’t know what happened, I just know. that one day it popped in my head that I wanted a second baby, and I wanted to be pregnant. I kept this to myself, until the fiancé’s 30th birthday cruise when my sister in law asked if I was ever having another. My response was “maybe”. I don’t think you realize how big of a deal this is! I had never admitted this to anyone – not even Robby.

About a month after our cruise we were riding in the car and I turned to Robby and said “I don’t want Dylan to be an only child, I want another baby”. I could hear the eye roll, I had been talking about looking into adoption, and with his new job, and our new house, I knew it was something he wasn’t ready for. So I quickly added on with “I want to be pregnant again”. I don’t think he saw that one coming, but we decided to start trying right away.

HOW I FOUND OUT

I was off of birth control at the end of June because of antibiotics, so we decided to just leave it and it would happen when it happened. Well it happened A LOT faster then we ever thought. I thought I was pregnant when we took a trip to Oklahoma in early August because I had a slight nauseous feeling that wouldn’t go away, and headaches. I was never sick with Dylan, but I did get bad headaches. I took a test and it came back negative, turns out, it was just too early to tell.

I had a miscarriage before Dylan, so I was already nervous about finding out too early and loosing a baby. In the next weeks to come, I just felt different, and I finally missed my period. So I took another test. Both (because you can’t trust just one) came back POSITIVE. I couldn’t believe it! I wasn’t sure what to do, Robby was going through some crazy things with work and was working 18+ hour days, and all I wanted to do was tell him!

HOW I TOLD HIM

I kept the secret all night. I had to get everything together to tell him. Luckily he was too busy to know I was up to something. In true Insta worthy fashion, I made Dylan a “Big Brother” shirt, and put together a letter board with my positive tests. As I sat in my home office I heard him hang up the phone and called him in to help me hang something. I was trying to record his reaction, but because I must have slipped because I accidentally turned off the recording.

He looked back and forth at me and my announcement. “Already?!” Is all he could say. I think he was mostly in shock, I mean we had just talked about having another one and BAM – we had baby #2 on the way.

I immediately told him he could only tell 1 person, and we were keeping it a secret until we were through our 12 week point. Having a miscarriage is scary, and I think it scars you for life of ever wanting to tell anyone you are pregnant. We both knew that the hardest person to keep this secret from, was Dylan. He had been asking specifically, for a baby sister, for months! He wanted a baby sister so bad that he would even ask to buy one when he saw a baby out (AWKWARD *Pauly D voice*).

We went to our first ultrasound appointment, and I have to say, this is one of the craziest roller coasters of emotions I have been on. You just don’t know what to expect. This is when you find out if the baby has a heartbeat, a due date, a reassurance that yes there’s a baby in there or the dreaded, no, it wasn’t meant to be this time.

Everything went perfect at this ultrasound, and even though it was still early, I had a really good feeling. The heartbeat was strong, and I just knew it was going to work out, whatever God had planned for us. Leaving our appointment, we couldn’t stop smiling. This was it, we were really adding on to our family. Jordan party of 4 here we come.

Now, to keep the hardest secret until we were ready. Those first few weeks are the slowest of them all!