Dylan is 3 and we finally took his first plane ride (ok this was about 6 weeks ago, but don’t judge, I’ve been busy!) We haven’t done any traveling outside of Florida with him other than our cruise. We have taken his daddy to the airport a few times and he always wants to go. Of course, what toddler boy isn’t obsessed with planes? We have been talking about going for about a month, but there hasn’t been to much excitement until the night before we left, when we really started talking about it. Explaining how we get to fly in the sky on a huge airplane is a little difficult for a child to comprehend. As a mom, taking this on by myself for the first time, there was a little bit of nervousness, mostly because we have a layover, so if the first part is miserable, we have to do it all over again right after.

I made sure to pack his favorite snacks, along with some candy surprises, and his favorite dinosaurs. Preparation was key! All electronics – check, full charges – check, coloring books & crayons – check. This was all I could do, and hope it was enough. The fear of the unknown is always the worst. Kids are so unpredictable; you just never know if they woke up on the right or wrong side of the bed until its time. Luckily, my not a morning person little boy was so excited to ride on the airplane for the first time.

Going through security was a little overwhelming. There were a lot of people in line! We had to wait about 40 minutes to go through security. There were dogs, police officers, crying babies, alarms beeping, people rushing, it was stimulation overload! But Dylan did really well. He stood quietly attached to my leg and would ask every few minutes when we were going to ride on the airplane. He wanted to ride on the BIGGEST airplane. After security was the train to take us to the correct terminal. This was exciting, he ran to the doors waving to me “come on mommy we have to ride the train”. Once we got to our terminal he ran to see out of the windows “that is the best plane I’ve ever seen”. 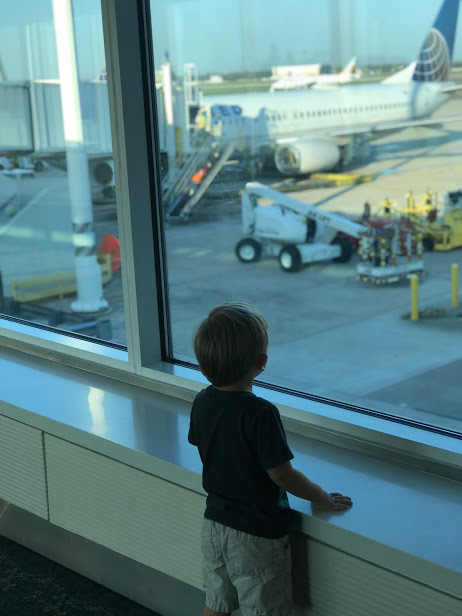 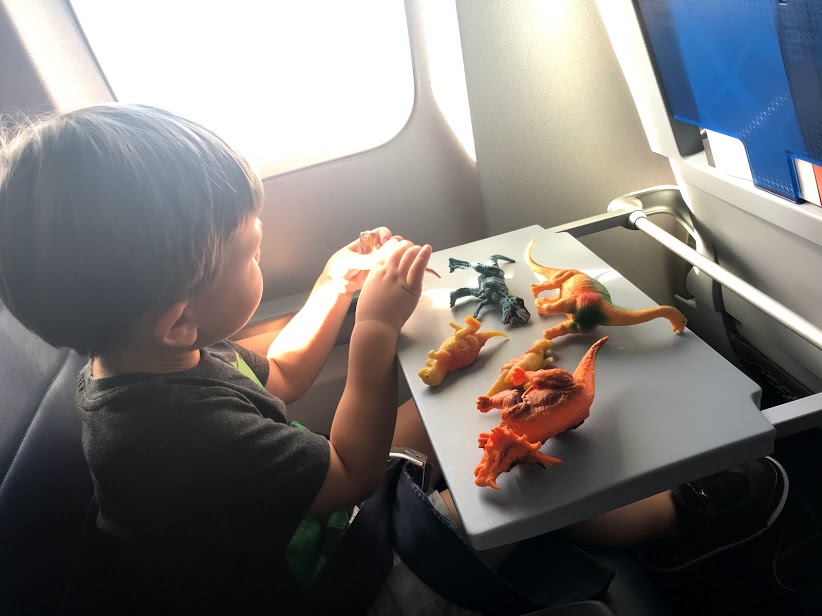 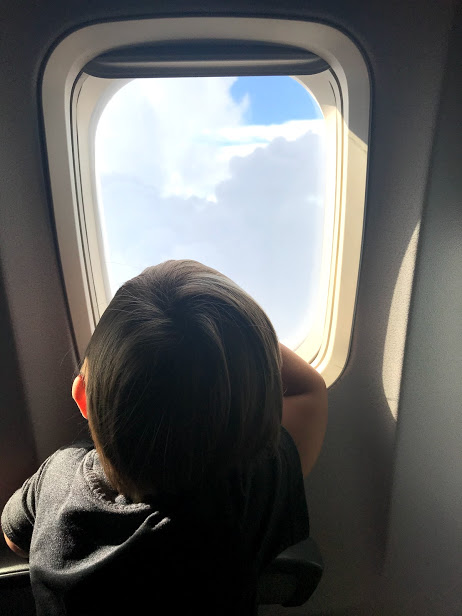 I just wanted to soak up all of his excitement. Since daddy couldn’t come on this trip with us I was working hard to document every second. “Say Cheese” was always followed by a quick and stern “NO” (not really a surprise there). Comments like “this is the coolest plane I’ve ever seen!” and “thank you mommy for taking me to ride the airplane” filled my heart.

Once we got on the airplane he was great. Luckily for the first flight we ended up having an entire row to ourselves. This was great for our first experience.

Overall, everything was great! We hit a little turbulence, but he was fine. I gave him snacks to eat during take off, so I’m not sure if that helped his ears or not, but take off or landing never bothered him.

I have included my MUST haves when traveling with a toddler, and where you can order them below. (sponsored)

Ultimately I’ve learned that the element of surprise is best! Making sure that you have tricks, toys, and randomness stacked away will keep your sanity when traveling with a toddler! I also learned that not overwhelming him with to much at one time was really important. There is so much going on, and letting him observe and take it all in was good for him too. I kept all of his things tucked away in our back pack unless he asked for something. He was so excited to ride the plane for the first time and he wanted to see and experience it all!

Now that the first one is over, where should we go next?

Any tips or tricks you find important when traveling with your little ones?

Part of the Mom Squad